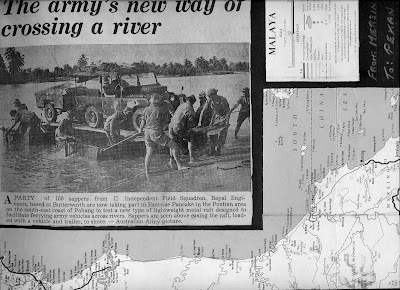 
This exercise started at Kahang, on the 2nd of March and ended at Kuantan, on the 24th of March 1962.
The main exercise began at Endau, and then from there we had to cross five rivers, testing a new type of metal raft designed for ferrying army vehicles across rivers.
The rivers we had to cross were the Sungei Endau, Sungei Pontian, Kuala Rompin, Sungei Merchong, and Sungei Bebar.
Between the rivers we had to go on foot, the road was along the beach, which made it very hard on the feet walking through the sand.
PHOTOS