Hi, my name is John(Jock)Docherty. That’s me above. I was posted to CRE Op Crown on 31 August 1964 for 38 Engr Regt in Ripon. On arrival I was attached to MT which was run by the RASC later to become the RCT. The main task was using the Commer tippers to move laterite from the quarry to the strip. They were wrecks and it was only the expertise of the REME lads that kept them on the road. It was fun though. We each tried to outdo each other to see who could do the most trips in the day. Just like that Stanley Baker film “Hell Drivers”. Without the violence of course!

I got pretty bored after a while though and wanted to try something else. I had seen the six Scammells in the yard and I think only one of them was roadworthy. I talked the MTO, an RASC Captain, into letting me try and sort them out. I’d had some experience with Scammells in Chatham.With lots of help from the REME lads we got them all on the road. We then spent a lot of time moving broken down plant from the strip to the LAD.I seem to remember the Howard train being picked up more than anything else. We began moving BLR(beyond local repair) plant to Bangkok docks and collecting new stuff. Those were the good times. We staged overnight at U.S. bases and the Yanks really looked after us. We had fresh milk every day! I’ll digress here for a minute to say we were told by the Americans that they had offered fresh milk and veg to Mad Mac but he turned them down. He reckoned his troops were quite happy with their tinned milk and veg.Seems he wasn’t US friendly! Maybe that’s why the US Phantoms used to buzz the officer’s mess every Sunday morning. Anyone else remember that? 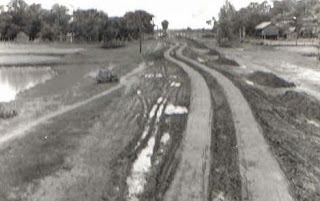 The road to Bangkok was a nightmare in places. Above is just one example. When it was wet we slid all over the place. When it was dry it was like driving over corrugated iron. The load would slide from side to side on the trailer so we used OPH pins down the sides of the trailer to stop the load slipping off. Of course they didn’t help later on as you can see from the next pictures! 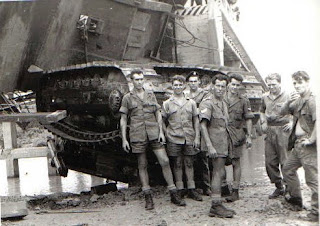 Paddy, in front was the driver 1 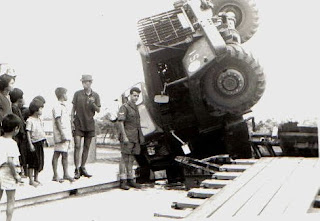 Me and my scammell 1 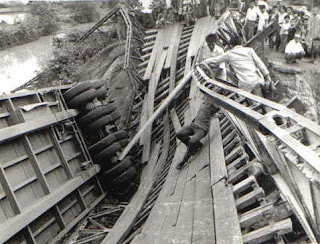 Just minutes before that D8H finished up in that position I was sitting in it. As we approached the bridge for some reason I decided I had to get back to the cab. I t was lucky I did because just as I got there I looked over the side and saw the bridge moving with us.The wheels of the trailer were pulling the bridge away the the bank. Just before we tipped over I dropped through the cupola and landed on Paddy! When everything stopped moving we crawled out through the cupola on to the concrete part of the bridge. Not a scratch on either of us. We saw that the whole vehicle was being held in position by a 12” length of angle iron used to hold the tool bin lid! I t took some time and effort to get the whole rig back upright but as soon as it was I jumped in and started it up first time. It had been nearly upside down for three days. I’m not sure who rebuilt the bridge, 54 or 59 but they did it in record time. I drove a couple of miles down the road turned round and drove back over the new bridge back to camp. The only damage was a cracked king pin on the trailer and a broken fuel injector pipe on the scammell. 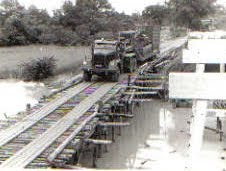 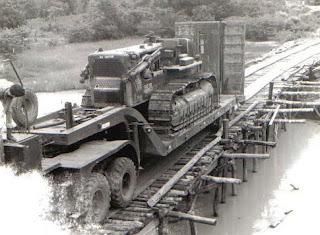 These bridges were rated at 10 tons! They actually sank about 8” as we drove over them. The secret was line up and put your foot down. Worked every time. Well nearly every time!
About this time the strip was nearly ready to be tarmaced. I got the job of going to Bangkok to collect the new Starmix from the docks. Normally no problem but it was the wet season and the roads were particularly bad further south. On the way back with the Starmix we found one of the bridges had been washed out. We couldn’t hang about till it was repaired so we decided to go off road and find a shallow crossing. Bad idea! We got bogged down, so to reduce the weight we offloaded the Starmix and decided to winch it across. It worked, but it took nearly a full day. 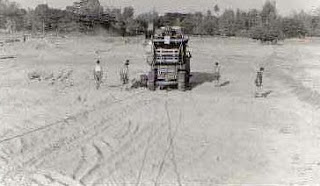 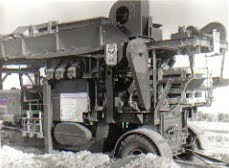 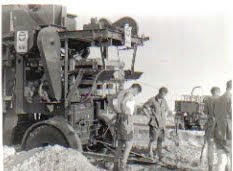 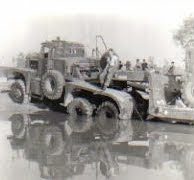 I don’t have any photos of the Starmix at work on the strip but I know it hadn’t been damaged.
Not long after these events, I cought infectious hepatitis. I was medivaced to BMH Singapore then to BMH Kluang and finally to BMH Cameron Highlands. I was destined to suffer a year on a no fat diet and NO ALCOHOL! I’d had my last taste of my favourite Mekon&Coke. By the bye while at the Cameron Highlands recuperating I received a telegram from home saying my wife had given birth to my 1st daughter. I wet her head with milk!
When I got back to Kok Talat I was rewarded with my first stripe.
I suppose everyone remembers Mekon, but can anyone else remember the M.O. who experimented with it? He put it in the carburator of a 3tonner and it started up. He was also said to have sat up all night drinking it while writing a report on its affects. I gather he was taken away by men in white coats the next day. Any truth in that? 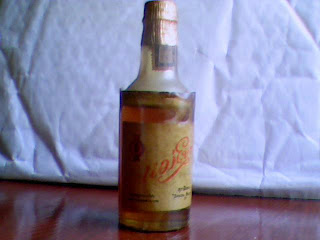 I don’t have a death wish so I’ve never opened it. 43 years old! And the locals thought it was mature if they kept it more than a week. I’m sure they used to mix it up with their big aluminium cans of kerosene. After a few I defy any Squaddy to tell the difference.
Anyone else use the hole in the fence near the bottom gate after lockup? I wonder if the ants nest is still there.
My memory is not as it used to be so I’ll take this chance to apologise to all the lads I knew but can’t remember all their names. If any of you remember me I’ll be glad to hear from you, especially any of the RASC lads.
I went on to do 22years plus 4 years in the TA in Gateshead. I now live in a village just outside Durham and looking forward to 11 Indep Fd Sqn reunion in Coventry on 6-8TH June 2008.

This was taken last year on D-Day. Aged pretty well and in good health. We celebrate our 44Th wedding anniversary on 23 May 2008. 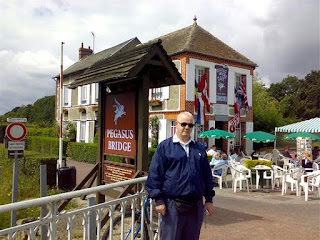