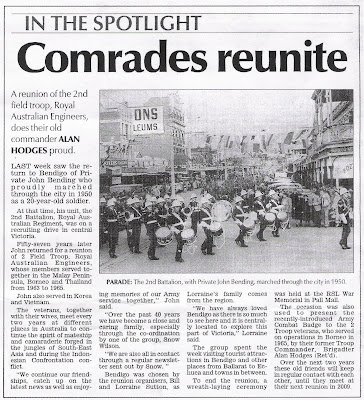 __________________________________________________
Bendigo Re-union From Moose.
October 2007For my Wife and myself the re-union started on the Saturday morning of the 6th when we drove in to Melbourne City 35ks to meet and take Simon [snow] and his wife Marilyn Wilson up to Bendigo. After much hand shaking and back slapping and kissing one another we then drove to Bendigo 155ks. On the way Snow told us that he and his wife had come to Melbourne via train from Busselton Perth over 2,000ks from Melbourne and that when he arrived his wife had to get an ambulance to take Snow to hospital. Where the doctors found his Sodium level was very low, this did not improve as two days after the start of the re-union Snow & Marilyn had to fly back to Perth.
The reunion started on Monday the 8th with a meet and greet barbecue tea the people at the motel put up an marquee with table and chairs and we all got together just like the old days.Plenty of food and beer but all being old members now we were all in our beds by 9-30pm.
Tuesday the 9th
At 8-30am we boarded a coach [bus] trip to Ballarat 70ks visiting the Eureka Centre at 10-30am lunch and a visit to the war memorial which is a very long piece of marble with all the names of our fighting men and Women from the second world war including POW’s member at Changi. Back home with power naps on the coach ride home, with the evening free most members went to the local pub for tea and to play the pokies I don't recall any body winning any large amounts.
Wednesday 10th
Bus leaves motel 10 -00-am to drive to Castlemaine just to wander around the shops also went to see a house that was built back in 1863 which is old for Australia as were only 200 years old the owner was a Ernest Leviny. From Castlemaine we then took a steam train ride to Maldon with lunch supplied and coffee and tea at the Maldon station the ride went for about 40 minutes.Then coach rides back to our motel evening free just to sit around and talk catch up with photos of all our grand children plus a few beers and wines plus looking at photo albums from 2 Field Troop RAE.
Thursday 11th
Nothing booked but members went in a saw the Central Deborah gold mine plus a ride on a talking tram which runs through Bendigo, and some most went to see the Chinese museum which has the Sun Loong Dragon. The longest in the world over 100 meters .
The evening of the Thursday 11th
my wife had arranged for all of 2 field troop to have a meal and drinks on the tramcar restaurant the dinner takes about 2 hours and was enjoyed by all with a lot of fun making jokes about one another.
Friday 12th
To day we booked the coach and went to Echuca which is a bout 2 ½ hours drive up to the Murray River where we went aboard the M.V.Maryann Paddle steamer it was about 2 hours of eating and drinking and hearing a person singing songs from yesteryear.
Saturday 13th
Most members went in to Bendigo for the day just pub-crawling and the lady’s shopping and then we all went back to the motel to dress and place on our medals and get on another coach at16-30pm.We arrived at the Bendigo RSL museum [Returned service league] where we saw photos of world war 1 and 2 Korea, Malaya, Vietnam.and memorabilia. Out side we formed up with a bugler and two lady’s who had lost their husbands from Malaya Lorraine Jones wife of [Bill Jones,] and Margaret Stokes wife of [Peter Stokes,] We also remembered the mates and their wives who have passed away while the bugler played the Last Post & Reveille, it was a very moving moment, we had all our photos taken and I will forward them on to you when I get them.From there we went via coach to the Bendigo RSL club and we had a room to our selves.We put up the Australian flag the ORIGIONAL 11 Independent field Sqn flag along with the 2 Field Troop Flag, which was donated by Ken Jolley and signed by all members of 2 Troop.We had our evening meal and my wife Lorraine was given a standing ovation and a very big thank you from all that attended. Then we went about raising troop funds we had a Dutch auction where we raised on $1,000 dollars to go toward our next re-union in New South Wales in 2 years.I recall Alan Hodges paying $52-00 for next year’s calendar [only cost $2-50 to buy at a shop]Lorraine my wife had told every body to bring some thing from the state that they live in for the Dutch auction. I purchased a pottery port bottle and plate for $50-00 cost about $35-00 at Bendigo pottery.
We have a lot of old English names over here as you would expect as all the people who started Australia were convicts, name s like Pall Mall in Bendigo , so that ended the re union for 2007
And then we learned a week Later that [old Bluey ] Colonel John Stevens R.E had lost his battle with cancer , I sent my condolences to Gordon Chave to pass on to Norma as we were able to get John and Norma to come to a re-union in Tasmania some time back and we found them to be a delightfull couple.Hank you may edit this if you wish , I hope it will be enough for your great site all the best I will have a look some time in the future Moose
_____________________________________________________

I have been organizing reunions for our Troop thefirst in 1993. We are having our 6/7 in Victoria starting 7 Oct. We have had 3 REmembers come out so far in the past. None this year though. Those were JohnStevens OC. Tom Thornton SSM. Fred Gray Orderly Cpl. I will pass on your infoto the rest of the blokes. Havent time to look at your web site in detail at themoment but will later.
RegardsSnow Wilson
________________________
we just had 6th re union
1993 Alice Springs Northern Terrority
1996 Tanunda South Australia
1999 Hobart Tasmania2
003 Busselton Western Australia
2005 Caloundra Queensland
2007 Bendigo Victoria
The next one is in New South Wales in 2009
Only had 27 out of 40 mainly due to ill health mainly due to cancer that the others didn't come , Hope your fit and well I went back to work today bloody hard after two weeks off , all the best moose
Posted by Hank Lawrence